By Gregg Licht on August 05 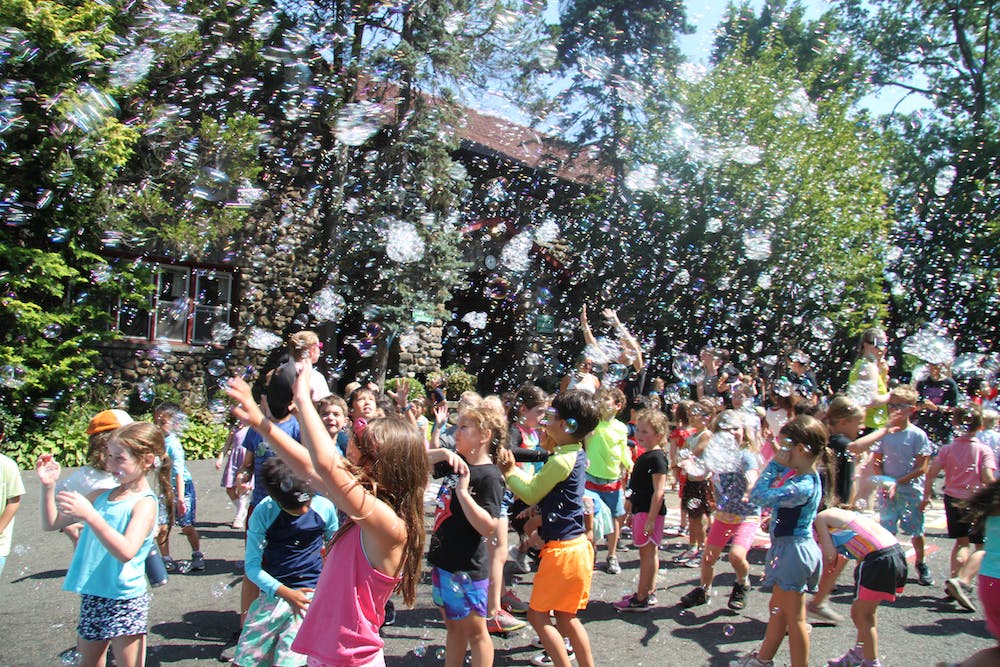 We rocked it out at Elmwood this week! It is hard to believe how much happened in just five days. Every day was jam-packed with opportunities for fun, adventure, growth, trying new things and friendship. This week was our best week yet, and while we are sad that it is over, we cannot wait for what is yet to come!

It was an extraordinary day. The story of the event was that Elmwood campers wanted to rock, but the “neighborhood watch” wanted to ruin the fun. The camp had put on a benefit rock concert to save Elmwood. During the day campers got to party on waterslides and with a bubble bus, go on a world tour, make music videos and participate in rock and roll relays. In the end, campers went to the rock concert which included many amazing acts. The final act was, “We are the Wood”, which was so good that it changed the neighborhood watch’s minds. We saved Elmwood!

This event is the highlight of the summer for Elmwood’s Second Graders. Tarplin Games is a two-day event where second graders compete in many events and get scores for both winning and sportsmanship. This year’s events included: soccer, trivia, relays, competitive sitting, swimming and counselor challenges. Congratulations to the Purple team led by Mia and Raven on their Tarplin Championship.

Check out the week six clubs!

What could be better during a hot week than water balloon fun! Upper Villagers got to build forts, compete in balloon challenges and then launch the balloons toward the other forts. All of the groups built architectural masterpieces and the forts survived. Way to go to the Upper Village!

Elmwood’s fourth graders got to go to Boundless Adventures where they soared in the trees and challenged themselves in every way possible! Many third grade groups went hiking to Harriman State Park this week. Our Upper Villagers love adventures.

Speaking of adventures, our Seniors had one every day. They went Horseback Riding and Sailing on Monday and Tuesday. On Wednesday, they left for Camp Southwoods on their two-night trip. While at Southwoods, they had tons of time at the lake where they went swimming and tubing. They also got to play basketball, gaga, have a campfire and play Capture The Flag. It was wonderful in every way.

We wish the entire Elmwood community a wonderful weekend. See you Monday!