By Gregg Licht on July 08 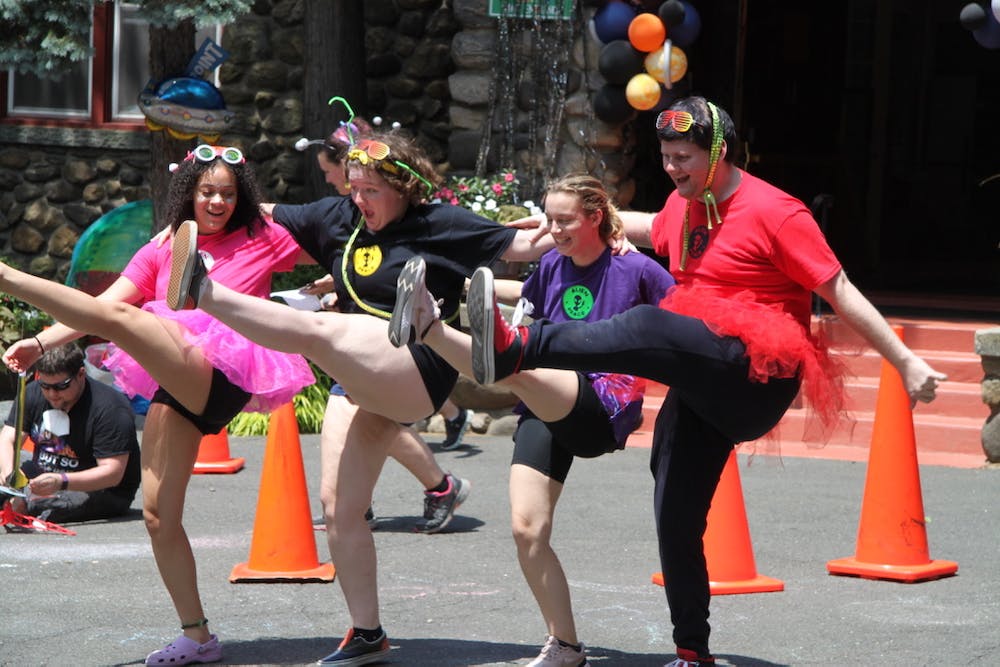 We had a glorious second week! There was so much packed in that it is hard to believe it was only a four-day week. One of the joys of being a part of the Elmwood community is that everyone is accepted for who they are. This week there were examples of that everywhere. Kids and staff alike feel more and more comfortable with each passing day. Friendships are becoming stronger, counselors and children are becoming more connected, and most are trying new things because of the support around them. The BEST part is that this is done while everyone is having the time of their lives!

Here are a few examples of what made this such a spectacular week.

Gregg started with Bim Boppa Loopa Lappa and then Hillari announced the week’s birthdays. Gregg was then presented with a very large gift, but he was having trouble opening it. Out of nowhere came the Elmwood Improvement Association. They said they would help Gregg open the present, but they quickly became more concerned with how to make Elmwood better. Pop played Simon Mangonius who wanted snakes to be everywhere at camp. Laura played Hydrangea who wanted Elmwood to be filled with good smelling potions. Henry played Gurt who just thought everyone should constantly exercise. The characters got more and more ridiculous, but none of them could open the present. They all finally gave up and took the present with them. We will all have to wait to see what happens next!

At the end of the meeting, Gregg led My Name is So with the entire camp. Anne and Jessica closed the meeting with a beautiful round of Happiness.

Tuesday was also Birthday Match Day. This is one of our favorite Elmwood traditions where every camper wears a label with their birthday on it. They spend the day searching for their match until they find it. When they do, each member of the duo gets a cool sticker. It is such a great way to meet new people all around camp.

This week, Ryan, Elmwood’s wonderful hiking director led hikes for LV2F, The Seniors, and LV2G. All of the campers and counselors came back with a huge smile on their face. The hikes were challenging, but every kid completed the hike and were able to enjoy the views at the top of the mountain. We look forward to all of the hikes coming up in the coming weeks.

This week went “swimmingly!” Campers are in the water, learning new skills, becoming safer, passing levels and working hard. We are very proud of every camper’s progress as they become stronger swimmers. We are also very thankful for sunny weather which allows our instructional swim program to go strong each week!

To the Moon and Back

We LOVE our special events, and this week’s was a doozie! The day started out with our all camp meeting where all of a sudden, a UFO was flying above the camp. It landed in Elmville! A few moments later, visitors from Mars came out to say hello. The aliens wanted to learn all about life at Elmwood, and we learned all about alien life. It got pretty silly from there. Today’s activities included: waterslides, Asteroid Alley, Comet Races, Planet Pitch, Cosmic Kickball, and Space Adventures.

At the end of the day, all campers got to see a rocket get blasted into space where our messages were sent back to the moon. They celebrated with Alien dancing. What a day! z

We could not be more excited for next week where the magic will just keep coming.

We wish all of our families a great weekend.