By Gregg Licht on July 02 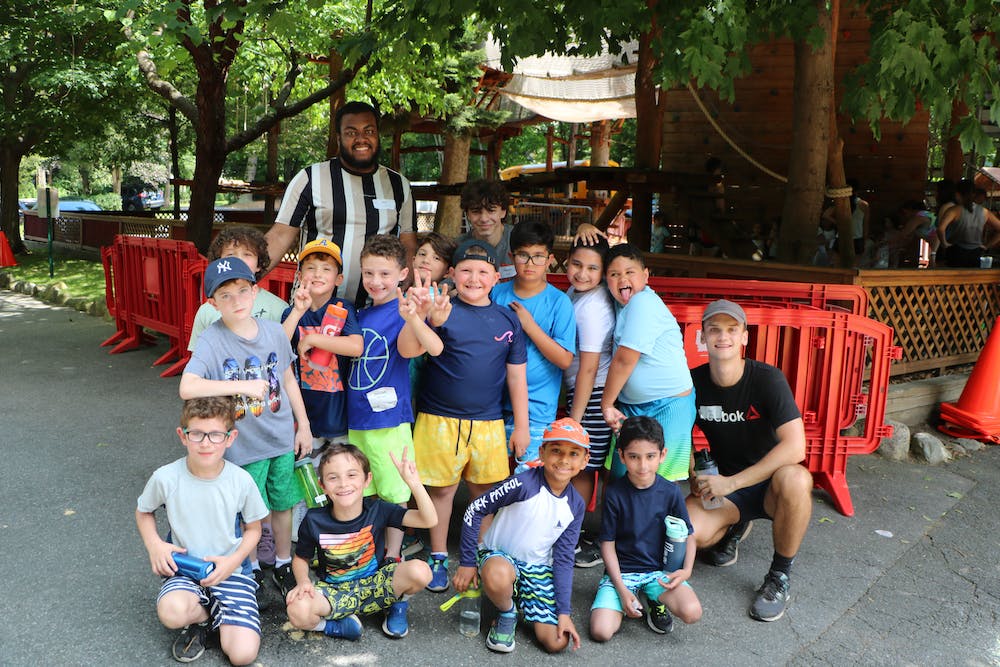 Check out our week 1 highlights video!

How could it be the end of week one already? We had a spectacular week in every possible way! Children are feeling safe, making new friends, being silly, getting in the water, trying new activities, and diving right into the full camp program. Campers and counselors have taken the opportunity to get to know each other, build a team and go out of their way for others.

As part of our summer focus on kindness, each day has started with a kindness challenge. Each village has their own kindness jar. Every day, a Division Head reaches into the jar for the day’s challenge. Some of the challenges this week were: invite a specialist to lunch, comfort someone who is upset, help someone pack their bag during change, sing a song to new friend and ask someone to play.

Thursday was our first all-camp meeting since 2019. It was AMAZING. Gregg led Bim Bopppa for the camp and then Hillari and Gregg did their classic chase looking for each other. When she found him, Hillari called up the Birthday Bunch and announced the birthdays of the week. Allie then led a Price is Right game where Hillari and Gregg had to guess the prices of their favorite cookies. In the bonus round, they had to match Division Heads with their favorite cookie. Kids and counselors were cheering as Hilari and Gregg made their choices. Unfortunately, they only got one match correct. Maybe, next time!

What a week for our youngest campers! They all got into the pool and were assigned a swim level. Many of our three and four year olds dunked their heads for the first time while others started learning introductory skills. Every kid tried something new, pushed themselves and started to feel more comfortable and confident in the water. We are excited to see the big steps or “strokes” they make in the coming weeks!

Stepping Stones also got to try so many different activities this week. Soccer, Softball and more at the Ballpark, Yoga with Laura, Gymnastics with Flavia, music with Anne, and of course art with Jojo and Ray. This week’s project was making July 4th popsicles. Many of our five year old campers got to try Adventure Park for the first time. They LOVED it.

The best part of the week was watching our campers get comfortable in their summer home. We are excited to watch them grow and soar in the coming weeks.

Lower Villagers were very busy this week. Whether at Instructional Swim, Soccer, Science, Cooking , Gaga, or another favorite activity, every camper had fun, learned and got introduced to the Elmwood Program. Our second graders enjoyed having their first Specialty: Magic with Charlini. They learned several tricks and the art of working with the audience.

There is no doubt that the BEST part of the week was bringing back Lower Village Club. Campers got to pick an activity to specialize in for the week. This is an opportunity for campers to deepen their skills in a particular area or try something new and gain independence though making choices and meeting new people.

This weeks clubs were:

Be sure to ask your child what they picked!

Wow! This week was Epic for our Upper Villagers.

Yes, this week’s activities were awesome. Skill building activities at basketball, Chia Pets at Ceramics, duct tape battles at science and candy machines at Woodworking are just a small sample of what was going on in week one. Electives started this week in every age group, and there were a ton of week one special events.

Upper Villagers got to participate in the Amazing Race where they had to complete challenges to stamp their passports. Campers worked on crossword puzzles, balloon shaving, headbandz and more to get introduced to all of the fun we have at camp. Later in the week, we had our first annual UV Gagathon. Campers worked together, and two groups were victorious.

Third and fourth graders got to try our various Intensives at Performance, Discovery, Soho and League. Next week, they will pick from the above choices and delve into this wonderful four week program.

As is Elmwood tradition, every group names themselves each summer. We are proud to present to you the Elmwood 2022 Group Names:

Have a wonderful July 4th Weekend!