By Gregg Licht on August 08 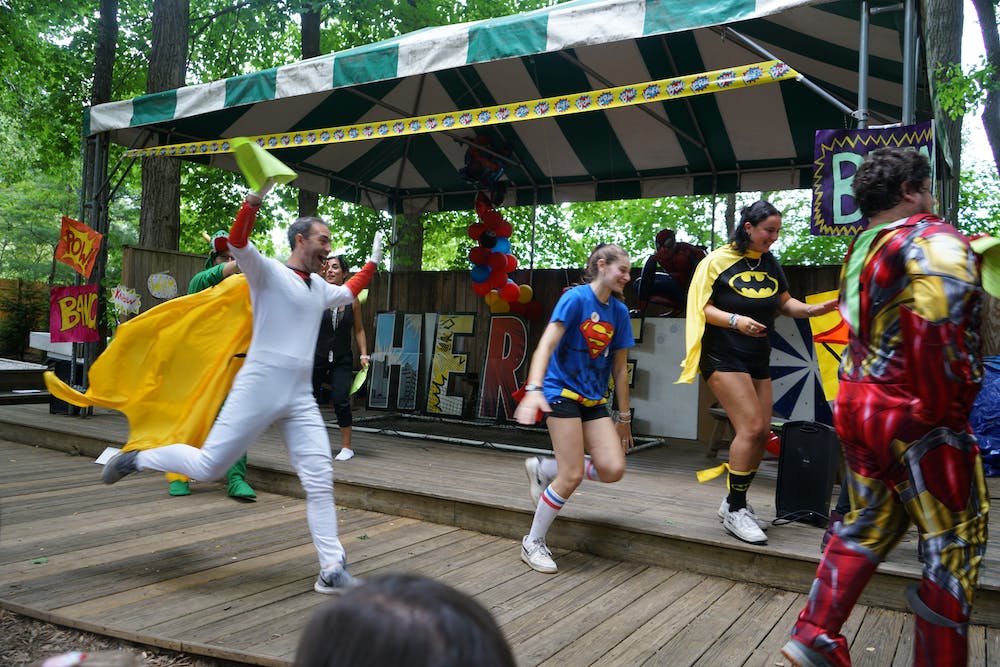 Every day at Elmwood is a chance for learning, growing, and being together. There is so much that goes into every second at camp. Every detail is carefully planned so that our entire community can feel the magic of summer. The best part of what we do at camp is to make sure that every lesson, every experience, and every moment is filled with fun. Our belief is that summer should be a time when every camper and counselor develops critical skills but while having the time of their lives.

Week 6 at Elmwood was just that!

Superman (Gregg) and Captain Marvel (Hillari) came to visit Elmwood with all of their Superhero friends. Aqua Man (Sean), Iron Man (Beau), and Captain America (Steve), were just a few of the visitors. Superman and Captain Marvel announced that they were visiting Elmwood to put on a huge Broadway musical. The Joker (Allie) and the Loki’s (Carolyn, Berk, Leora and more) did not like that idea at all. They were trying to ruin the musical

At the end of the day show, all of the Superhero’s auditioned for the show and the Joker tried to cancel the show. Luckily, Batman came and put an end to the mischief. In true Elmwood fashion, Toonces the Driving Cat came by, and we learned that he was the real villain because he wanted the Show to be called Cats! It was a ridiculous day filled with laughter, spirit, cooperation, and outrageous costumes.

Some of the activities were:

At this week’s Super Meetings, Anne led the counselors through many paper airplane challenges, Jamie Rubino is the all-camp champion! We also sang the Fred the Moose song.

The Tarplin Games were this week for our second graders. They were busy participating in sports, games, activities, and challenges. Although they were competing throughout the entire two-day event, the main fundamentals of the experience were to encourage sportsmanship, spirit, kindness and friendship. All who participated had a great time. We had a few special visitors who came during the awesome event including long-time Lower Village Division Head Morgan and Tarplin Games founder, Dan Tarplin. Congratulations to the green team who took home the championship!

We are very excited about our next 2 weeks at camp. We will not take any moment for granted, and thank every family for trusting us with your children!