By Gregg Licht on July 25 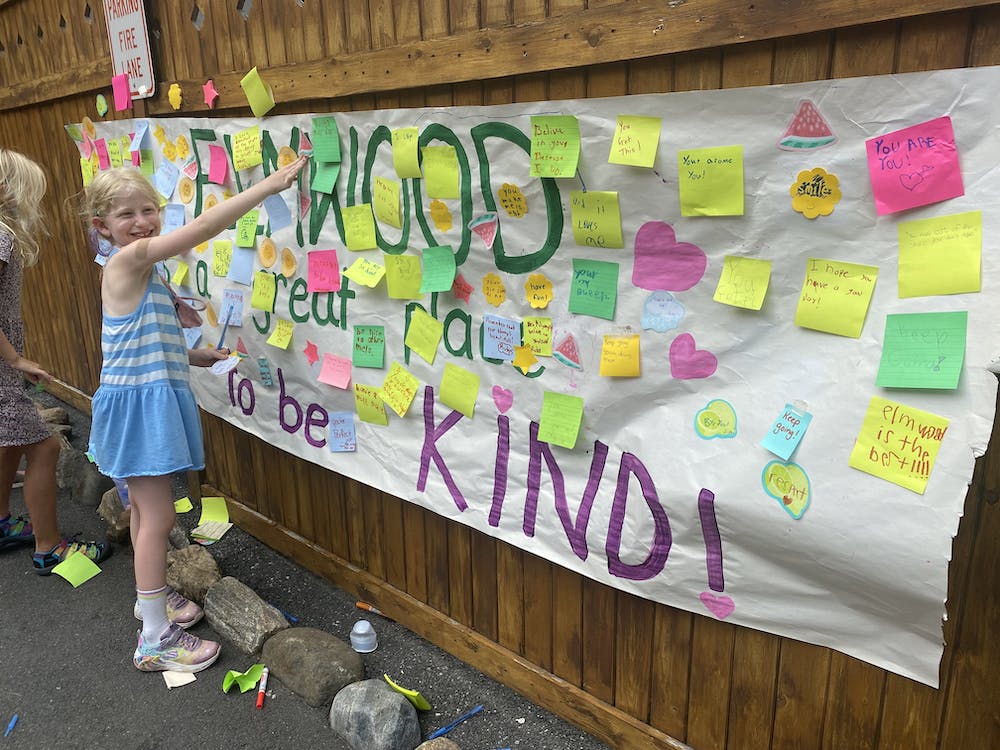 And just like that, we are halfway through the summer… Where has the time gone?!!

While the summer may be flying by, we live in every moment of camp. The richness of being together, strengthening friendships, working together, and celebrating makes each second at camp extraordinary. There is no community quite like the Elmwood Community because we live the Elmwood Ten every day. The Elmwood Ten are the goals that we have for every camper and staff member at Elmwood. This week’s blog highlights how the Elwmood Ten was alive during week four!

Tuesday was Camp Kindess Day. The campers spent the day writing letters of kindness to staff members all around camp saying thank you for the help. There was also a sign at the front of camp that said “Elmwood is a great place to be kind!” The campers and staff wrote kind messages on post-its and covered it!

As part of Kindness Week, every group participated in a kindness circle where each child wrote or drew a positive attribute about every other child in the group. We have also been working hard with every group to focus on how we treat each other, what we do when we feel frustrated and how we actively work toward making everyone in the group feel accepted and included.

One of the very important parts of camp is children learning to take care of their own personal items. Every changing room now has a great strategy in place so that campers can pack or help to pack their own bags and keep their changing rooms neat.

Our first-grade campers have now become experts and navigating the food line and are able to make good choices about what they want to have for lunch.

All of our campers are working hard at recycling, using less, and keeping camp clean. Collectively, we are all learning how to take better care of ourselves and our place.

There were so many new and amazing projects in art this week! The Stepping Stones learned about mosaics and made their very own Stepping Stones! They then continued to make mosaics with other materials. The Lower Village campers made gnome homes out of natural and recycled materials. Upper Villagers continued to work on their masks!

The campers were singing all day long at music this week! They learned about rhythm while using boom whackers. The campers also played memory games. They ended music by learning a folk song.

Another new thing that many campers participated in this week was going on a hike. Here are a few camper Quotations about their experiences:

“We saw so many amazing views” “Jerry told us a story about how a dog one time saved his life” “There was a lot of AMAZING rock climbing that brought us to 700 ft!”

This week during group time, the campers worked together to pack breakfasts and lunches for Feeding Westchester. They wrote kind notes to put a smile on the recipient’s faces and then loaded them up with drinks, snacks, and a meal. We have focused on the power of teams to help others.

Drama is a large program at Elmwood. This past week, campers learned to express themselves improvisation. A new game, called Panel oi Experts, was introduced. Three campers went on stage knowing a specific topic. Some of these topics included fashion, nature, the mall, and math. Each camper had a specific style. One dislikes the topic, one likes the topic, and one does not care for the topic. This game allowed the campers to practice their skills in various roles!

There were so many fantastic activities happening across our program areas this week. This week, we are highlighting gymnastics.

The campers have mastered their forward rolls and handstands in gymnastics! They are now working on the high balance beam and the high bar! One of the new skills that they are learning is pull-overs on the high bar. It is so amazing to see the camper’s skills grow!

Our Upper Village Club Program continued this week. Campers got to explore their own unique passions and discover a possible new interest. Each camper participated in a 4-hour club in one of the following electives: Fabric Collage, Fencing, Sports League, Produce Batteries and Tape Circuits, Game Board Design, Musical Theater, and Comedy Improvisation.

Elmwood campers always work toward accepting each other while building a community based on compassion, respect, and understanding. Several campers had their last day on Friday. They will be missed. We said goodbye while celebrating their individuality and contributions to camp.

Wednesday was Clue Day at Elmwood! Gregg’s friends visited to help solve the mystery snack of the day. We had Beau the cheesemaker extraordinaire, Fregg and Frillary the directors of Frelmwood Sleepaway camp, Dr. Carey the veterinarian, Steve the astronaut, Wild Sean the Rodeo Cowboy, Seth from safety management, Toonces the driving cat, and lastly Professor Plum.

Gregg had hidden Luisa’s recipe book in a special box so that no one would find out the mystery snack. Upon opening the box, there was a note that read “ I’ve taken the book and I’m not giving it back! Today there will be NO SPECIAL SNACK”.

Gregg and his friends then asked all of the campers if they could help solve the mystery as well. Throughout the day campers solved mysteries left and right. They made their own spy glasses and decoders at science, masks at art, went on a scavenger hunt to collect clues, and even went through a special spy training!

After a long day of training and strengthening our crime-solving skills and collecting clues, campers returned back to Gregg and his friends to help solve the mystery. After admitting to Luisa that he had lost the cherished recipe book, Gregg called in the world-famous super-sleuth Shirley Holmes.

Shirley interrogated all of Gregg’s friends. After collecting alibies from everyone, Shirley asks the crowd if anyone had found puzzle pieces. After putting all of the completed puzzles together it showed a clue, “Check the Luggage.”. Luisa’s recipe book was still nowhere to be found until Shirley realized there was one last trunk to open, but it was locked.

Gregg then called Thomas to come help. Turns out, it was his trunk! After unlocking the trunk Gregg found the missing cookbook! Thomas LOVES his ice cream snack at the end of the day and did not want to change to a new snack. After learning that change is a good thing, the mystery snack was revealed! Special fruit pops! Another Elmwood mystery solved!!

We can’t wait to kick off our second half of the summer tomorrow.